We started our way around Sicily after crossing over from mainland Italy with a quick no-fuss ferry to Messina. Although I had done a short visit years ago, I hadn’t quite realised how much this island has to offer. It is a mix of beautiful sandy beaches, very well-kept temples from the Greek and Roman times, and Medieval- and Baroque-style towns dotting the island. And of course there is the active volcanoes. Oh, and the great food…

We kicked off by meeting in Catania airport with Ana, an Argentinian friend who was traveling around Europe and whom we invited to join us for a few days. Our first stop with her was Taormina (although we stayed in Giardini Naxos). Taormina undoubtedly is in a stunning location on a hilltop between the Ionian Sea and Mount Etna and has a pretty decent ancient Greco-Roman theater, but it is a very touristy town, a little spoilt by the dozens of souvenir shops and bus-loads of people. As we came down – and just as the sun was setting – we stopped in Isola Bella, a little island in a small picturesque bay that you can reach on foot by walking on a spit of sand at low tide. Liam was the only brave one to strip and have a little swim in the freshish water.

Next on the agenda we opted for a big change in temperature and a day visit to Mount Etna. For that we drove the caravan to around 1900m, layered all the clothes we could, and then took the ski-lift to 2500m. From there a lot of folks take special 4×4 buses that drive you to the main crater, but we decided against that, and instead enjoyed the views and sunshine from the area. Liam played around in the bit of snow there and it was a good spot to walk this lunar landscape and look up to see the smoke coming out of the craters above. The temperature was around 4 degrees and when we came back down from the ski lift, the rifugio was completely engulfed by thick clouds. We waited a bit but as it was not clearing up, Kai drove very carefully back down to sea-level with what I would describe as a minimum of visibility. 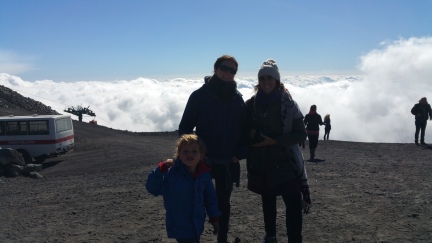 After that we drove south to Noto, which ended up being the southern-most point of our whole 4-month trip – Noto is as far south as Tunis or southern Greece. We stayed in a cute campsite with outdoor showers under the lemon trees and Liam got quite good at picking lemons with Ana’s help. As seemed to be the case for most of Sicily, we easily found all-year round open campsites. The only issue was that many of them were deserted and we needed to call ahead and let folks know we were coming so somebody could actually ackonwledge our arrival (and charge us). Here we visited the Lido di Noto, and hang around the beach for a while, followed by a visit to Noto’s old town. We were all very impressed with how pretty and grandiose this small town is. I had never heard of it, but I can see why it is described as “an architectural supermodel, a baroque belle so gorgeous you might mistake it for a film set.” We also saw it at dusk, which made it quite special, with yellow lighting showing off the myriad of churches and palaces. Very worth the visit! 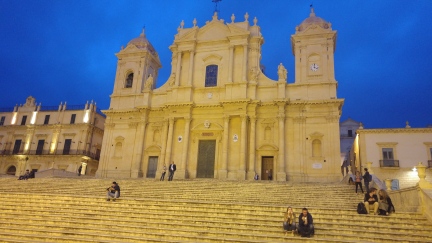 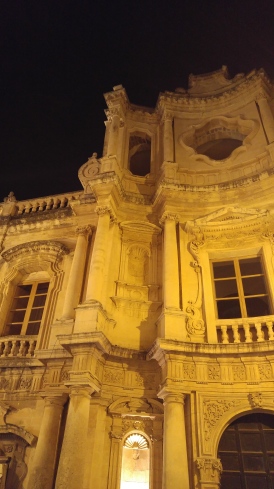