Our month-long stay in Croatia can roughly be divided into three activities: Hanging out by the coast/beach, visiting a few national parks and experiencing the cities. The previous blog entry on Istria already showed some of this, and the remaining posts on Croatia are split this way.

During our time in Croatia we did spend a fair amount of time just lounging by the spectacular coast and we often found really nice spots for our camper close to the sea. We tried to take it easy and spend a few days in a place, dividing our time between playing games, the beach, everyday activities like eating, shopping, and also seeing a few of the local highlights.

For example, we stayed by the beach close to Split/Trogir and dropped into each of them for a morning stroll and evening dinner respectively. In some places we had some company on the beach, giving Liam the opportunity to play a little bit with other kids. 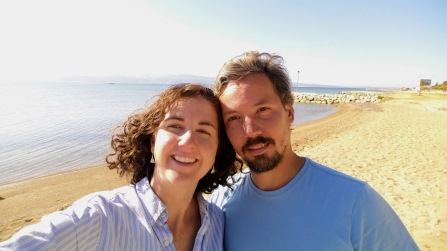 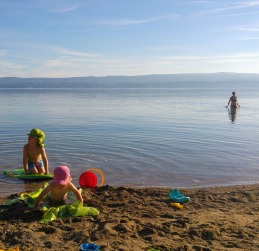 Twice, we took out a full day for a boat trip. The first one originated from a town called Pakostane and somewhat happened by accident. We were strolling along a relatively empty seafront in the evening when we happened upon a little marina. We had discussed a trip to the Kornati islands, but previous inquiries hadn’t shown much promise (out of season, expensive, bad times…). As we came up to the port we saw a little booth with light and some posters. As we looked at them, the owner came out. It turned out that a French family had asked about a Kornati trip a few minutes earlier! 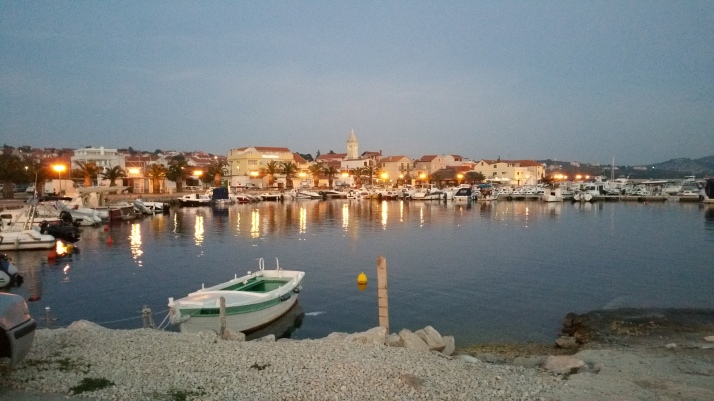 We combined forces and headed out the next morning on a speed boat to see a number of islands and a really nice beach that we had for ourselves. The captain was super nice and our fellow travellers (a three-generation French female family) was chilled and nice to be with. Our second trip started out of Dubrovnik. This was a bigger boat with maybe 20 other people, headed for the Elafiti islands just north of Dubrovnik. The overall idea was similar to our first trip: See a few islands and spend some time at the beach. While the first two islands were a bit hum-ho, the beach on the last one was truly spectacular. To get there, we had to hop on a little golf cart, which was great fun for everybody. We were generally lucky with the weather with these beach days, with the sun shining, not a tonne of wind and the water warm enough to encourage us to dive in. This was mid October in the end, so we could not have expected much more! During the boat ride itself, Liam made a friend in the captain and spent a significant part of the time on his dashboard.

Throughout our stay we could really notice the low season, with many places closed and the open ones having very few guests – mainly older couples. While convenient in some ways, Liam was missing some interaction with other kids, so we decided to spice up his life by visiting a kids-friendly hotel in the vicinity of Zadar, directly on the coast. We spent a significant amount of time in or close to the pool, and Liam also had the opportunity to join some of the activities the hotel was offering (e.g. kids dinner, kids disco, treasure hunts and movie nights). We can highly recommend this type of accomodation for parents with little ones, as the entertainment options are really good and it gives parents a nice break too!

One thought on “Croatia: Coast/beach life”