Our next stop was Siracusa, known for its architecture and ancient ruins, and as the birthplace of Archimedes. The old town is on an island called Ortigia, connected by a bridge that makes it seem more like a spit of land, filled with beautiful historical buildings. We arrived just in time for sunset, and the orange colour was highlighting the whole place. As we walked through the town, the baby was very active inside of me (probably a chocolate bar is to blame!), which started my belief that if it came early we would have to call it by the name of the place we were at. As beautiful as Siracusa is as a city, I can’t say I was as excited about Siracuso or Siracusa as a name for our second child and neither by any of the following options to come: Armerina, Erice or Palermo!

That night we did not stay in a proper camping ground, but rather close by in the parking lot of the small port. As dodgy as that sounds, it actually made for a really nice location to park: just by the sea, overlooking the old town and with some other fellow campers for company. It’s worth mentioning that since our arrival in Sicily we had been warned about the likelihood of being robbed, particular our bikes from the back of the van, but thankfully we not only had no issue, but also found everyone (locals and immigrants alike) very helpful and friendly rather than threatening in any way. 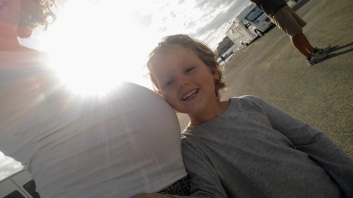 Still in Siracusa, we visited the very well-kept Teatro Greco from the 5th century BC(!) and the Ear of Dyonisius, which is a massive limestone cave that supposedly was used as a water storage, or as legend has it, as a prison with great acoustics where Dyonisius could eavesdrop on his prisoner’s plans and listen to their tortured screams. Pleasant stuff.

It was time for us to temporarily leave the coastal route and head to the interior of the island, to Piazza Armerina, but before we had to say bye to our friend Ana and drop her back at Catania airport. It was so nice to have Ana join us for some days, both for bringing a bit of change to our usual  3-person routine, but also so she could experience our camping lifestyle… and play loads with Liam, who was delighted to have another adult willing to entertain him!

In Piazza Armerina, the main spot to visit is the Villa Romana del Casale, which is an elaborate and very well-kept Roman villa, with what is considered the richest and most high-quality mosaics of the time. Not sure I can do it justice in words, but below a selection of the varied and extensive mosaics there, depicting everything from voyages, hunts, and interestingly enough, 5 century AD “bikini-girls”. 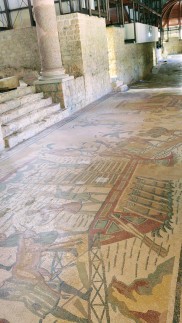 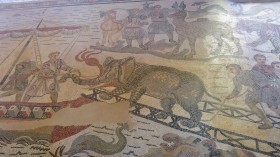