After our off-roading and hiking experience in the interior, we moved on to south Iceland. There’s so much to see and do in this part of the country that we took a few days to slowly check things out.

We kicked off with Hvollsvöllur as our base to visit the Lava Center, a very good interactive museum on all that’s volcano related. Not far away you can actually see the infamous Eyjafjallajökull volcano, which notoriously erupted in 2010 causing major flight disruptions. There’s a lot of footage and interviews from that and other eruptions and how they’ve impacted the local communities.

We also got our daily dose of waterfalls by visiting Seljalandsfoss and then Skógarfoss. In the first location there are three waterfalls right next to each other and a camp site just in front of them – which we used. You are able to walk on a path behind the larger waterfall, which was fun but also crowded with many other tourists. I enjoyed it more when we put Liam in full rain gear and ventured towards one of the smaller waterfalls. It falls into sort of a cave that you can carefully walk into and then you are right next to the waterfall. Yes, we got well sprayed, but I at least felt like a very happy child. 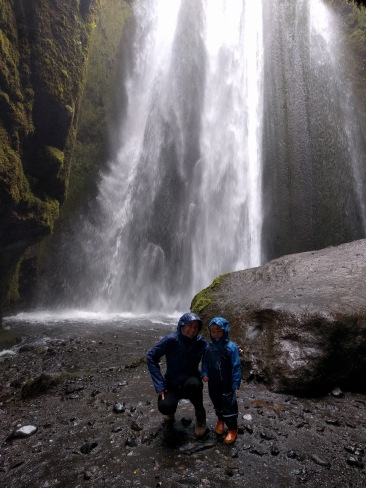 Next up: Skógarfoss. Besides seeing it from the ground, you can walk up some 500 steps on the side of the waterfall to see it from above. Despite initial complaints Liam managed all of them.

We also visited the small town of Vik – sort of by accident. We were mainly in search of a gas station, but we ended up having lunch, doing grocery shopping and going to the volcanic sand beach. And yes, fueling up in the end.

We also needed our dose of hot water, so we headed to an unmarked natural swimming pool in the mountains. First you walk through an empty green valley to reach an old pool that looks abandoned to the elements. In the Seljavallalaug pool the hot water comes in on the deep end and then it gets gradually cooler as it gets shallower. There wasn’t much in terms of infrastructure, but it was really nice to just lounge around between mountains. 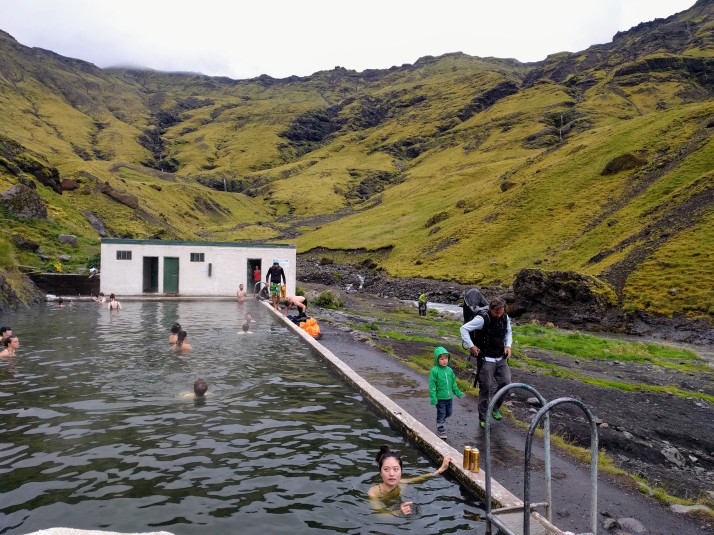