The Vestmannaeyjar islands have a special history. For once, the youngest island was born in the 1960s, due to a 5(!) year volcanic eruption. The main town on the main island got buried under lava and ash in 1973. So this made for an interesting target.

What is more, every August thousands of Icelandic revellers come to the main island for a huge festival celebrating Iceland’s independence. We had checked the special schedule for the 30 minute ferry ride – but we didn’t take into account how big the festival would be in comparison with the capacity of the ferry. The lady at the ticket office dutifully informed us upon arrival at noon that no ferry tickets were available for the rest of the day, but that the 8am ferry for the next day still had some tickets left, which – judging by the enormous amount of Icelanders with crates of beer queuing for the current ferry – was somewhat of a surprise. But 8am for the following day it was.

The rest of the day went with (very good) food, some football, a very pleasant hour of pitch-and-put golf and the search for a camp site. We ended up on a cute, but eerily deserted site in the middle of some farm land. We were the only ones and it looked as if nobody had been on the site for a while. I found that a little sad because a lot of thought had been put into the setup, which was all based on boat and ocean themes. I hope that some day more people go there.

After a quiet night and early start we arrived just in time for departure. Once on the island, we decided to start the day with some swimming. It was a very sunny day and the outdoor pool was nicely heated to 32 degrees, so the Icelanders were out en masse and we joined in the fun. After that it was time for lunch and a visit to the “aquarium”. While there were some fish, the real attraction were the orphaned sea birds housed there and we came face to face with a puffin as well as some information about the volcanic history of the islands.

We then passed by one of the many concerts going on all over town and got a taste of Icelandic pop music – much to Liam’s delight. A quick visit to the old harbour fort (including some extensive imaginative cannon shooting on Liam’s part) was all we had time for before our return trip was due to the “mainland”. 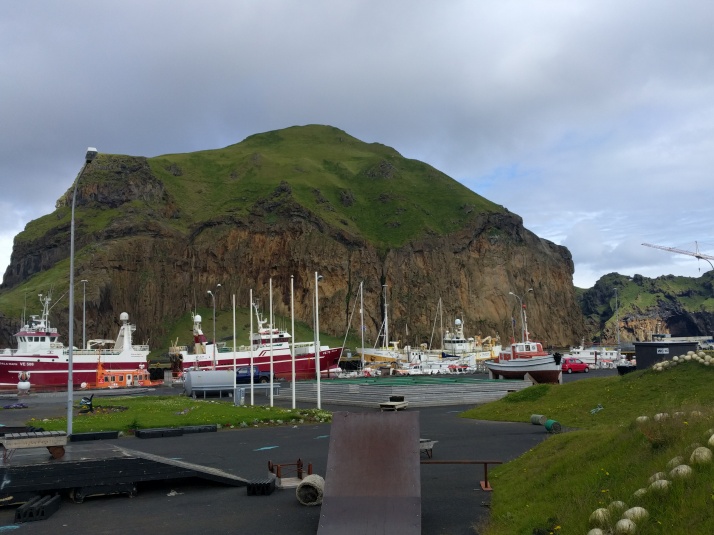