Every 10 days or so we find a hotel, to take a small break from the camper van. The funny thing is that by now I actually sleep much better in our van, but I still appreciate a nice private bathroom to take long hot showers, and ideally some WiFi for us and a TV for Liam, who otherwise doesn’t really get any screen time. So next we drove to Husafell, which – besides a very good campsite – has a nice boutique hotel, which we opted for the first night there.

Husafell is a tiny hamlet that only in more recent years has become popular with hikers and outdoor enthusiasts from abroad, due to its proximity to Langjökull, Iceland’s second largest glacier. It is also not too far from Reykjavik, so it’s a common weekend destination for Icelanders to enjoy some camping. From what we could tell, the “town” is made up of a church, a petrol station, a landing strip, a couple of houses and the campsite and hotel where we stayed. And most of it is owned by the same family, who saw the potential to offer a great base for hikes and tours to the glacier (not without some controversy it seems.)

When we arrived we just pampered ourselves: went to a hot pool, ate some hearty food and watched the World Athletics Championships whilst downloading House of Cards on Netflix for later. And loads of WiFi for general catching up. I know, weird comforts from “civilized” life.

The next day we took the “Into the Glacier” tour, where we first drove with a surprisingly curt Italian driver on a 4×4 bus to the mouth of the glacier. From there we were given snow overalls and we moved on to a modified german-army truck (I’m being told it was a mobile missile launcher once upon a time) that drove onto the glacier and took us to the entrance of a man-made tunnel that lead us 30 metres under.

Our guide Haraldur took us to the first chamber so we could put crampons on (you do walk on ice…). Because we knew the tour would be about an hour long in 0 degrees, we decided early on that Kai would carry Liam on the backpack. He definitely could have done some of it on his own, but we were trying to avoid unnecessary whining whilst trapped in a glacier with a bunch of strangers.

Through some tunnels we walked our way through this glacier, appreciating the different ice layers and “summer lines” of dirt on the way. We could even see on the walls the dark ash layer of the well known 2010 Icelandic volcanic explosion. Funnily enough, they have a chapel style chamber inside where supposedly people have gotten engaged and married. And Haraldur even treated us to some Gregorian-style chants, as can be seen on the video below.

Inside the glacier we got to see a glacial river, and we could feel the melting droplets as the top layer of the glacier warms up in summer. Also we got a peak from the inside into a very large crevasse. Initially I had some reservations about the tour, because of the potential impact these man-made tunnels could have on an already fragile ecosystem. But I was assured by our guide that they have carefully planned these excavations and that they hope to teach people more about how glaciers are rapidly changing because of humans. Overall I would recommend the experience. 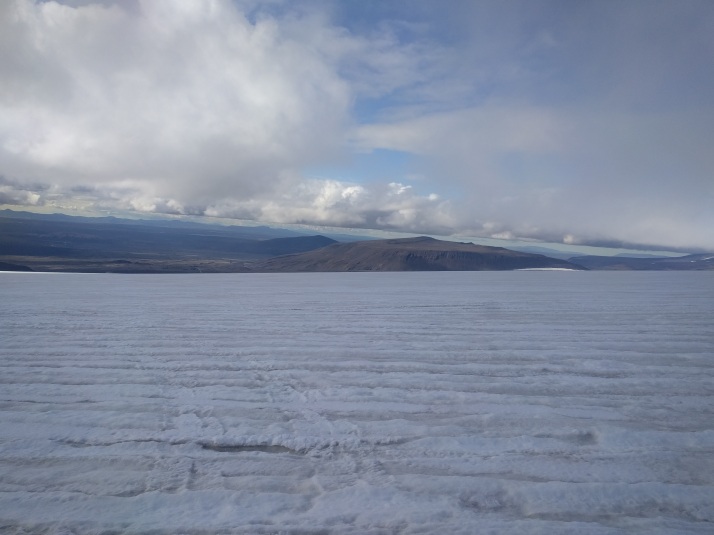