One of the amazing things in Iceland is how much water exists and how important it is. It shapes the country through rivers, rain and floods, in frozen form it forms Europe’s biggest glaciers and due to geothermal activity it provides hot water “right out of the box”. It is therefore no surprise that we encounter water all the time and the next few days shouldn’t be any different.

After our trip to Vestmannaeyjar we made a go for a popular valley formed by two glacial streams. One side of it is called Þorsmörk, the other is called Gòdaland. This required a fair amount of gravel driving and river crossing (in fact, the final crossing was the place that inspired an earlier post). The campsite we ended up in provided the following photo, complete with a certain sense of bewilderment on behalf of the drivers of the other trucks that we had actually made it. 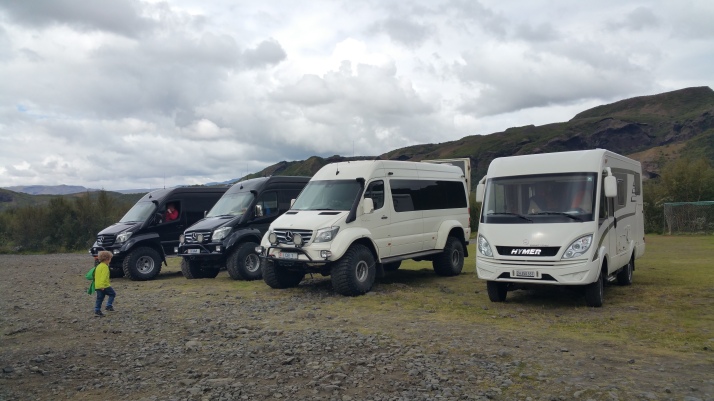 The campsite itself was very nice, with secluded spots. Since it was still a bank holiday weekend we saw lots of Icelandic families with 4×4 cars and trailers, with many kids playing outdoors until late in t-shirts while we wore 3 and later 4 layers. All a sense of perspective… The night saw quite a bit of rain which briefly worried me, but on the return trip the next day the crossings had similar water levels to before.

Back on tarmac – and after a leisurely lunch – we decided to make for Hveragerdi, a town known for its geothermal activity. A pretty active geothermal area is smack down in the middle of town and its springs provide enough hot water for this area to be the most prominent hothouse part of Iceland. Constant earthquakes move and change the exact layout and most surface springs had dried up, but Liam was able to cook an egg in a one and eat it afterwards, which he was quite impressed about. I was more impressed about the fact that the local shopping center is built right on top of a massive fissure, which you can see through a glass bottom in the building.

The highlight of our stay was a beautiful hike to a hot spring and river bath up the mountain. It turned out to be a bit longer than expected but the overall experience was worth the effort.

As we were coming back down to the parking lot around 9pm, people were still going up. Must have been quite the party there.

After Hveragerđi we continued our way towards what is called the Golden Circle, a couple of major sights easily accessible from Reykjavik. As such, tour buses and rental cars flock to these places, but the sights themselves are still quite accessible. First up we visited Geysir. This is the original geyser, in fact the whole word comes from this place. Ironically it is not ‘geysiring’ anymore after a recent earthquake, but his cousin Stokkur right next door still does 30m fountains roughly every 10mins. Not far away from Geysir is Gulfoss, one of the biggest and prettiest waterfalls in Iceland. And not far from that is a fancy swimming pool, where we ended yet another water-focused day of our trip.

The last Golden Circle sight we aimed for was Þingvellir, the ancient seat of the Icelandic parliament before Christianity arrived. Its real interest is in the fact though that two tectonic plates meet (or rather move away from each other), which creates a massive rift valley. In that valley a lake exists in which – to our significant surprise – snorkeling tours are offered. Quite the endeavour when the water is about 6-7 degrees Celsius.